We arrived in Memphis ready to hit Beale St. to experience some Blues and BBQ. Our first stop on Beale St. was an awesome photography gallery we stumbled upon. Every single picture displayed was taken by Ernest Withers, a Civil Rights photographer. Most of the pictures were of MLK Jr. during many of the protests which took place in Memphis.

The My mom recommended a great BBQ place called Rendezvous Ribs where we ended up having dinner. We navigated our way down a dark alley to the restaurant. Jeremy opted for the very healthy dish of ribs, BBQ brisket, baked beans and coleslaw. I went for the red beans and rice. Both dishes were absolutely delicious and the restaurant definitely lived up to their reputation. As we were leaving one server recognized Jeremy’s Australian accent and informed us they ship ribs to the Australian Prime Minister.

After leaving dinner very satisfied we headed to Beale St. We wandered into one of the bars on the strip expecting to stay for a drink or two then make our way to another bar. We ended up staying until the bar closed down listening to an awesome blues band!

The next day we had another very healthy meal at Gus’ Fried Chicken, a recommendation from a guy we met at the bar the night before. We both tried fried green tomatoes for the first time.

After lunch we went to the National Civil Rights Museum. If you haven’t visited this museum yet, I strongly encourage you to…& take your time going through it. The museum was originally the Lorraine Hotel, which is where MLK Jr. spent the last few days of his life & where he was shot. Across the street from the hotel is the second half of the museum which is located in the apartment building where James Earl Ray was when he shot MLK Jr. The museum covers almost the entire history of Civil Rights starting with slavery, highlighting their struggles & triumphs throughout American history. The museum is a very moving experience.

After the museum we left Memphis for Nashville.

Motel 6… how’s this for a mixed message? 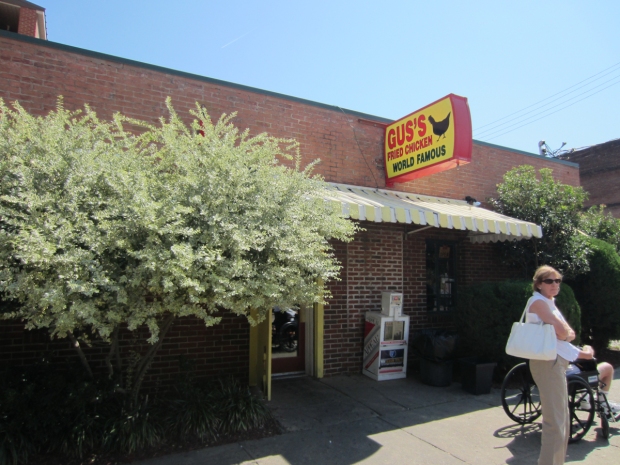 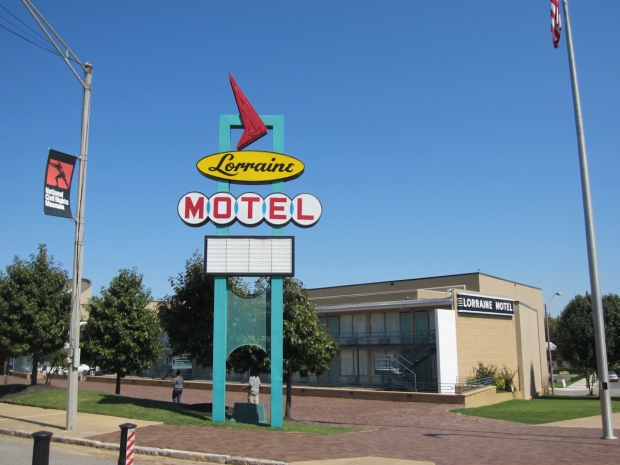